Alberta Broomball Association's Technical Director George Paleniuk has a strong background as a very successful coach in our sport. In 1978, George made the transition from a football coach to a broomball coach. He was very successful as a coach in high school and college level football. In his first year of broomball, he coached a team in Edmonton called the The Queen of Hearts, a member of the 8 team women's league. In each season that he coached them, the Queen of Hearts qualified, along with the Selects, as the Edmonton representatives at the Provincials. After that team disbanded in 1985, George moved over to the mens league and coached the Edmonton Hawks team in 1986. He also was a member of the Edmonton Selects ladies team coaching staff, and that season, the Selects claimed Alberta's first ever National Championship. His first year men's elite team (The Hawks) finished runner-up at the Provincials to the Edmonton Cougars. After a brief retirement as an active coach, George turned to conducting coaching clinics, an activity he is fond of which he continues to do today. He has put on his coaching & high performance broomball clinics all over Western Canada, including Inuvik, Yellowknife, Victoria, Vancouver, Chilliwack, Kamloops, Hay River, Ft. Smith, Fort McMurray, Edmonton, Calgary, Cold Lake, Lethbridge, Taber, Saskatoon, Regina, and Moose Jaw. In 1989, George returned to coaching on an active basis, by forming an elite men's team, the Edmonton Express. The team was comprised of members of the Edmonton Cougars and Edmonton Hawks. That team won Provincials and represented Alberta at the Nationals in Winnipeg. That came home with a bronze medal, the first ever Nationals medal by an Alberta men's team. After the Winnipeg experience, George once again took leave as an active coach and continued his clinics and he also wrote several coaching articles. He also developed a video on high performance broomball called â€œTimeout 1â€ and â€œTimeout 2â€. This video is being used today by coaches in six different countries. He resumed full-time coaching in 1992, as he coached the Edmonton Selects team. They won Provincials and returned home with the silver medal from Nationals after a heartbreaking loss to Quebec in the championship final. In 1993, George was asked to coach the Yellowknife Westtown Wheelers, a junior team from the North West Territories. They finished fourth at the Canadian Junior Championships that were held in Cornerbrook, Newfoundland. This was the highest ever placing by a team from NWT and the highlight of the trip was an upset win over Quebec, who were the defending Canadian champs. George returned to the men's scene in 1994 as coach of the Lethbridge Panthers. That team had the pleasure of playing for the National at home, as Lethbridge was hosting the prestigious event. George was named 1st team all-star coach as the Panthers had a good tournament and proved they belonged at that level of play. George was honoured to be asked to take over the duties as head of the Canadian Broomball Federation coaching committee last year, but he declined the position. Instead, he intends to focus his duties as the Alberta Broomball Association Technical Director and help out Alberta teams and coaches. Since 1998, George has continued as Alberta Broomball Association technical director with his focus directed towards increasing participant numbers. Along with this, he has helped establish programs in new rural sites. As a point of interest, the last seven provincials have been held in rural areas that previously had no broomball programs. George also found time to continue coaching. He coached the Calgary Bullets ladies team to a provincial championship in 2001. Also George coached the Yellowknife Ravens men's team to three consecutive Western Canadian Championships 2005, 2006, and 2007. Additionally, under George's leadership the Ravens became a factor nationally and internationally, winning medals at both levels. Besides assisting CBF in pioneering the level 1 coaching program, George facilitated a BF2 course conductor clinic in Yellowknife. George certified new Alberta coaches for the level 1 coaching program in Crossfield, Alberta. Recently, George aided Pascale Gauthier in the CBF lace to the top initiative by bringing Warburg, Alberta into the program. Besides Warburg, their joint efforts have led to new programs in Breton, Winnifield, Alberta. After representing Alberta in Ottawa in sessions dealing with the LTAD implementation, George was asked to be part of the LTAD committee. At this point in time, George's efforts are centred on opening up new broomball locations along with developing opportunities for youth participants.

I was introduced to broomball in 1980 in Yellowknife, NWT. I played from 1980 to 1984, refereeing as well from 1982 to 1984. Elected Secretary of the Yellowknife Broomball Association in 1982. I first met Greg Mastervick and Brian Gouthreau from Alberta while attending the 1983 Nationals in Cornerbrook, Newfoudnland as a NWT voting delegate. 1984 Nationals in Moncton NB, voting delegate for NWT Linsay R and Wayne successfully proposed to host the 1988 Nationals in Yellowknife. July 1984 moved to St. Albert, Alberta played in the Edmonton Broomball Association for the 1984-85 and served on the host committee for the 1985 Nationals in Leduc. June 1985 was approached by Greg Mastervick to run as treasurer, at first declined but said if I'd be at the meeting I would run. I didn't attend the meeting but that evening Greg phoned and said he hoped I would reconsider and accept as he and Brian nominated me for Treasurer and I was then railroaded in. I accepted. Player and referee in Edmonton from 1985-1991. ABA Delegate at Nationals for Kamloops, BC 1986, Montreal, QC 1987, Yellowknife, NWT 1988, Bathhurst, NB 1989, Barrie, ON 1991, Lethbridge, AB 1994. In 1992 moved to Lethbridge for four months and then moved to Medicine Hat, Ab. Traveled to Lethbridge on Sundays (an hour and half drive) to referee. Alberta Broomball Secretary/Treasurer since 1985 September 28, 2013 was elected for another two year term which will conclude 30 years as a member of the ABA Executive. Attended all ABA Provincials since 1985. Living in Medicine Hat, AB with wife Jan who has also worked several ABA Fundraising Casinos in Edmonton.

Gloria Gouthreau started her love of broomball in 1990 when she was introduced to the game in Lethbridge and lead to her involvement with the Lethbridge Broomball and Alberta Broomball Associations. This would lead her to volunteering, serving on committee' coaching at Provincials and National Levels. 1990 to present, worked casinos, bingos, host committee for tournaments, provincials, westerns, and both Lethbridge broomball and Alberta broomball. 1992 to present, delegate at Canadian Broomball AGM and attending Nationals, Have served on the Protest committee at a number of National Championships. 1993 Attended Happy Valley, Goosebay, Lab as representative for Lethbridge Broomball to see their hosting of the event. 1993-1994 Host committee for Senior Mens and Womens Canadian Broomball Federations AGM and Nationals. 1999 Volunteered for Junior Boys/Girls CBF in Leduc, 2005 Volunteered for Junior Boys/Girls CBF in Leduc, 2006 Volunteered for Senior Men/Womens CBF Nationals in Leduc 1994, 2001, 2006 Chairperson for the Hall of Fame Reception both in Calgary 2013-2014 Volunteering for the Senior Mens, Womens, and Co-ed CBF AGM and Nationals 2000 NCCP certified coach for broomball and 1987 certified coach for softball have served as bench coach at a number of championships for the Alberta women's team 2013 committee member for the CBF on Not for Profit Act, 2013 committee member for the CBF on Criteria for the new co-ed category.

Chris Galambos has been involved since 1972 when he tried to get a bunch of players together to the Calgary Broomball League so in 1973 went to his meeting with a $50.00 cheque he put his team in the 3 team league and took his choice of colour orange and the Calgary Blazers were born and have remained a team and keep the orange colour. Chris played his first year and then coached and managed the team until retirement in 2010. His dedication to the team and countless hours he put in on fundraising and team meetings, etc, have allowed the Calgary Blazers to thrive and exist since 1973. Chris has been on the Calgary Executive and has been their representative at the Alberta Broomball meetings over the years.

In 1976 he went to a Montreal broomball tournament with a small contingent of people from Calgary and helped put forth a proposal to create the Canadian Broomball Federation and proposed having the first sanctioned National Broomball Championship in Calgary in 1977. the proposal was successful. He also was a key contributor in bringing the 2001 Nationals to Calgary for the 25th anniversary and spend enormous amount of hours behind the scenes helping to make the event a success. Chris volunteered for the 1994 Nationals in Lethbridge where and Howard Hogback ran one of the rinks for the event. He also attended many Nationals on his own and brought back many ideas to help the Blazers to continue to grow as a team. Chris helped take the Blazers to four provincial A titles in 2002, 2006, 2007 and 2008. Blazers attended four Nationals, 2003 Cornerbrook B side gold, Selkirk 2007 B side Gold, 2008 Montreal and Saskatoon 2009 B side Gold.
Canadian Broomball Federation Championships would not be happening if not for a few people like Chris who had an idea of what broomball could be. 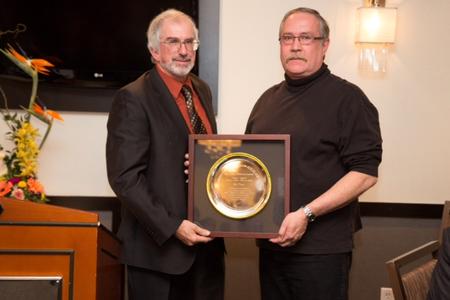 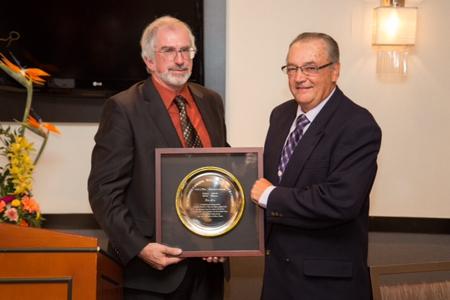 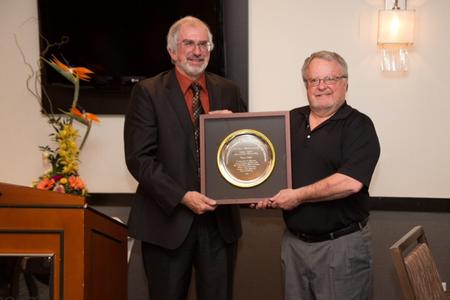 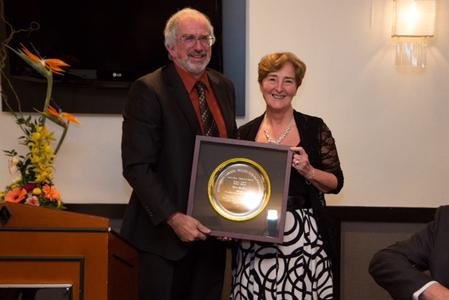 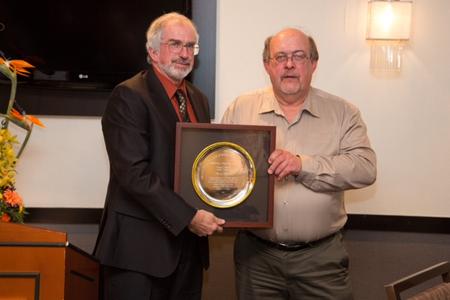 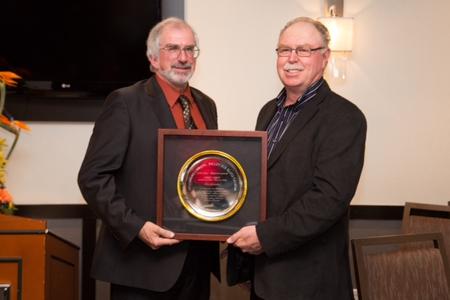 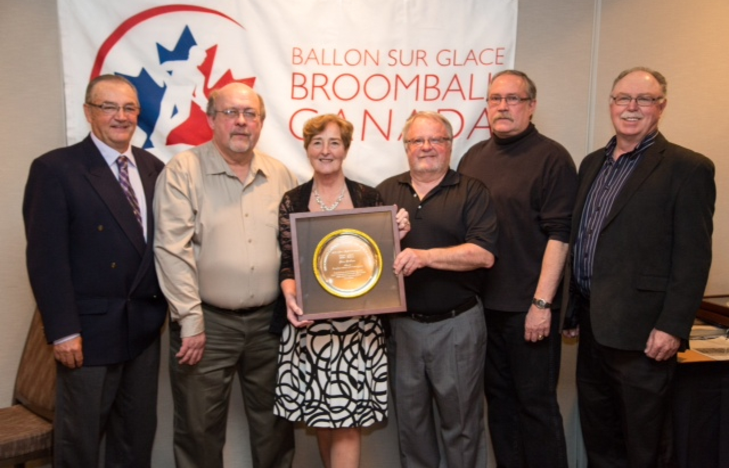 If anyone were to be crowned with the title of Mr. Broomball in Lethbridge, a definite choice would be Bob Tinordi. Tinordi has been involved with the sport locally for going on 40 years, He played the game from 1972 to 1992 before turning to coaching when the Lethbridge Panthers were formed in 1993. Since then, he has amassed an impressive record with the men's broomball team, winning seven provincial titles along with a trio of provincial medals. Under Tinordi's guidance the Panthers have competed in either CBF national championships including the B division gold medal when Lethbridge hosted nationals in 1994. Tinordi served as co-chairman for the tournament. The team has also won two B division silver medals, two B division medals and A division bronze medal. Tinordi has also led the Panthers to prominence at the international level, coaching the squad in nine international world championships. On seven of those occasions, the team returned home with medals. The panthers earned bronze at the 1996 worlds in Victoria and won silver at Bolzano Italy in 1998, both on the A side. Then came the Challenge Cup B side Gold medal at Victoria in 2000 and Cornerbrook NF in 2004. Most recently, the Panthers have competed in the Master Division. They won silver at the 2008 worlds in Vancouver and good at Innsbruck, Austria in 2010. Tinordi also has a long resume of service in the administrative capacity, serving as president of the Lethbridge Broomball Association from 1987 to 2007 and as the city's ABA representative during the same period. Through out the years, he was also active in helping raising money in broomball by organizing casinos and bingos.